Showing posts from November, 2010
Show all

Planets on their orbits. Source: Google Its really disturbing how I can become so outdated in this so called twenty-first century world when technology plays major role in each and every part of our life. Despite all the resources present right in my proximity, I still continue to remain outdated, which is evident as I keep hearing and coming across something new almost everyday. I mean 'new' or rather news to me, but not to others. But I think I can forgive myself for not knowing the silly stuffs, and of course not everybody can know and keep updated with everything.  I can't however forgive me for failing to know the number of planets in our Solar System. Till couple of weeks ago, I was so confident enough of my ideas on solar systems (at least pertaining to the number of planets, and their names). As a matter of fact, I have been fondly known to my friends as a 'very updated' person because I spend fair amount of time reading news papers, watching news and di
Post a Comment
Read more

An Unanswered Question of Love!

November 12, 2010
Thus came an emotion of red-heart blinking on the chat window. "Are we doing the right thing?!" Rigdhen expresses his apprehension about the latest development as he reciprocates with an exact same emotion. "Hehe, I don't know, may be..." comes the reply from the other end. It is so miracle how such emotion could mean so much that a new beginning just got on to the verge of germination. Everywhere the air was filled with mysterious LOVE, and all he could imagine at that moment was her-his new-found. .......... ............ .......... ............ "I feel very insecure of you. I fear that you might leave me alone, and go. Dear! Promise me, you will never leave me..." Thus he reveals his fears of losing his soul-mate every time he calls and chats with her. "Why do you always stay with that fear? Don't even worry about that, darling" forth comes the answer to his great relief. The more they spend time together, the more attached they become
Post a Comment
Read more 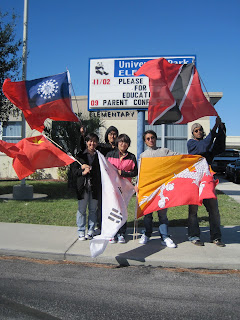 The homecoming event officially started since the 3rd of November, and today was the main event with a parade through the streets on the campus area. Homecoming is a tradition widely practiced in north American universities, colleges, and high schools to welcome the alumni and 'former residents'. (wikipedia) Bhutan joining rest of the countries. The today's parade included an ROTC troop, a merchant band, our university cheerleaders, and high school cheerleaders, a group of students representing the International Student and Scholar's Organization (ISSO), and several vehicles and people representing their sororities and fraternities. I was one of the students as a member of the ISSO representing Bhutan. Just day before yesterday, the student President of ISSO who happens to be my friend's girlfriend had emailed me asking if I could bear the Bhutan Flag and join the parade. I instantly felt excited about the idea, and promptly responded in affirmation. After all, th
Post a Comment
Read more
More posts